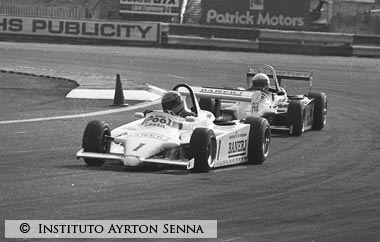 For highly respected Formula One photographer Keith Sutton there have been many memorable moments in a career spanning over thirty years. In fact their have been very few momentous motorsport moments that Keith hasn’t seen in that time but when he’s asked to pin down his favourite memory from his career a smile crosses his face and the response is almost instant. “Thirty years ago. March 1981.”

It is indeed thirty years ago this week since Keith, then a young and enthusiastic motorsport photographer trying hard to make his name in the sport, crossed paths with a young Formula Ford driver from Brazil who was also at the beginning of his career and attempting to make his own name in motorsport. That driver was Ayrton Senna da Silva and what was to follow that week was the start of a friendship that would last until the legendary driver was tragically killed one sunny, spring day at Imola during the San Marino Grand Prix.

On March 8th, 1981, Ayrton Senna was competing in Formula Ford 1600 at the fast airfield circuit of Thruxton. This was only the Brazilian’s second car race having moved up from 100cc karts in his native country but already all eyes were on him after finishing an impressive fifth on his debut at Brands Hatch the week before.

Having offered his photographic services to a variety of publications but only receiving indifferent replies in return he was commissioned by Autosport Brazil. Keith takes up the story. “I was at Thruxton working for a Brazilian motorsport magazine that wanted photographs of Brazilian drivers racing in England. I was shy in those days so I never introduced myself (to Senna) – I just took lots of photographs of him, in the paddock, on the track – he must have wondered why this photographer he had never seen before was taking so may rolls of film of him at only his second event in a racing car.”

The race win that day went to Rick Morris with Senna rounding off the podium in third place after an aggressive challenge for the position from Enrique Mansilla.

The next round of the Townsend Thoresen championship was to be held at Brands Hatch on the 15th March.

After winning his qualifying heat Senna would start the final from pole position. At 4:30pm the cars took to their allotted grid positions and when the lights went out Senna was seen to pull away as the cars rushed towards Graham Hill Bend in a wall of spray.

Senna was invincible and took victory by 9.4 seconds from Mexican Alfonso Toledano. The emotional Brazilian was met with a kiss from Liliane in parc ferme and joined her husband on the podium to celebrate his first victory in a car.

Keith was also on the podium capturing all the emotions of this historic moment and remembers: “He won his heat, then he won his race and there I was on top of the rostrum doing the shots – fantastic light, him and his wife. Brilliant. From that moment I tried to get to as many Formula Ford races as possible, doing shots for him.”

So was to begin a working relationship and friendship that would see Keith photographing this prodigious Brazilian talent and handling all his public relations.

“I look back to this week thirty years ago with great fondness as it was the start of my friendship with the late, great Ayrton Senna. From the moment I first photographed him in only his second car race, and then taking his first victory a week later, I knew I was witnessing an incredibly charismatic and talented young racing driver who would one day go on to become one of Formula One’s legends.”

And though it’s now thirty years ago since these events took place it’s clear that this memory of two aspiring talents who both met at the start of their respective professional careers will remain a special one to Keith for the rest of his life.