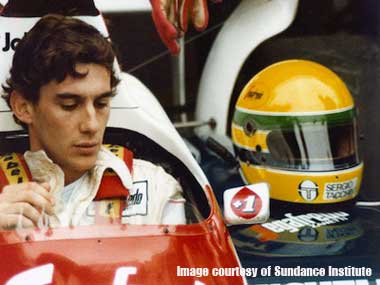 You could call me a bit of an old-fashioned filmmaker. Twenty years ago, I started making short films on super 8mm and 16mm, cutting them on film and projecting them myself. Being a “film” person, I was a bit late coming to the “digital” party.

When the producer James Gay Rees and writer/executive producer Manish Pandey approached me to direct a film about Ayrton Senna, the greatest driver in Formula One (a sport watched by millions around the world on television and a sport where the teams are always pushing themselves to the limits of new technology), it made perfect sense that the production and distribution of the film in the same way would make use of television and new forms of digital and online technology.

My fourth feature, Senna, is a departure for me in so many ways. It is my first ‘non-fiction’ feature. My intention was to create a story about Ayrton using only footage that already existed. There was no ‘shoot’: the feature is made entirely of archive material which is cut together and structured in such a way so the completed film plays like a ‘scripted’ drama.

The writer Manish and I cut an eleven-minute short film on his laptop out of material we found on YouTube and screened the short to the financiers Working Title Films and Universal. This film showed how we intended to make the film and played a large part in getting the project green-lit and financed.

The Senna film is a mosaic – the footage we used to make the film originated on a wide range of formats including 8mm, 16mm, 35mm, 1 inch, Beta SP and U-matic. Our brilliant team of researchers found material in archives all over the world in Japan, Brazil, Italy, France, the U.S. and the UK.

I love the technical differences in the material and the imperfections in the images and the sound. It constantly reminds the audience that this story is real, that you are experiencing moments in a real life. We didn’t have the option to go out and re-shoot: there are no re-takes in our film. All of this draws the viewers in, it makes the journey more thrilling and exciting and the climax that much more powerful and emotional.

Our masters were all either DVD or Digibeta – we color timed digitally and created a negative at the end of the process. In many parts of the world, the film will be released on 35mm but in the UK and in much of Europe, the film will be screened on DCP [Digital Cinema Package]. This is a format I love because the film is viewed by an audience exactly the way I intend it to be seen and heard. There is no more worrying about the projection being soft, poor racking or losing subtitles off the bottom of the screen. There are no more reel changes, scratches or damaged prints.

From a distribution perspective, the key with Senna has been the use of Twitter and Facebook and the direct connection this has enabled my writer and Executive Producer Manish Pandey and myself to have with Senna and F1 fans around the world.

I had never used Twitter before this film, so I was totally new to that world. I had a Facebook account but didn’t necessarily see the point of it: Why did I need to be “friends” with people I didn’t know and had never met? But through this film, I realize how powerful a resource they can be for filmmakers. Ayrton Senna is a global star. He is a god to most Brazilians, beloved in Japan, and he has millions of fans around the world. Manish, being a huge fan of F1, knew there was a huge audience out there hungry for information, so we both got on Twitter and life has not quite been the same since.

Now, if a fan in Sao Paulo, Malaysia, Austin or Adelaide has a question about the film or about the release, they can ask us and within minutes or hours they will have an answer directly from the filmmakers. I have been able read the reactions of Brazilians, Japanese and Australian audience members literally as the credits roll. It is no longer a case of waiting for reviews, or for the studio or producers to get back to me with what they think is important enough to share.

Our experience with Senna has been amazing and empowering. There is now a special dialogue between the audience and filmmakers and, in many cases, the audience has become a part of our distribution team! They have written blogs and reviews, contacted local distributors and cinemas pushing them to show the film. When there have been screenings, Senna fans have spread the word and helped to sell out cinemas. Journalists who have read positive reviews on Twitter have contacted us to see the film, all helping create more momentum.

We were originally told there was no audience for Senna in the US and if we were lucky, our film would go straight to DVD. Everything changed after the Sundance Film Festival. Through positive word-of-mouth over the Internet, we sold out six screenings, Senna won the World Cinema Audience Award for Documentary, and the film ended up screening in front of 1300 people at the Eccles Theatre.

Sundance led to SXSW, where the film showed twice at the fantastic Paramount Theatre. By now, the word had spread and people were flying in from all over the US especially to see the film, F1 and Senna fans like The Austin Grand Prix whom I met via Twitter and worked closely with to help spread the word.

The Senna film now has a community around the world that is working with us to promote the film. It has been an amazing, collaborative experience. The bottom line is that all this has been happening without a cent being spent on PR, publicists, press or advertising. Word of mouth has spread and it’s all been down to the passion of the filmmakers and audience out there who want to see Senna.

Films take years to make, and I am involved in every stage of my movies from beginning to end. I will do everything to make them as good as I can. However, I have always found the distribution stage frustrating, since it’s the one part of a film where I have had to take a back seat. I don’t own my films, so I’m not in control of the process. I have to live with the decisions of others and the consequences. Now, with digital technology, Kickstarter, and online promotion, filmmakers can own their films, put their work out there, find an audience and play an active part in the distribution of their work.