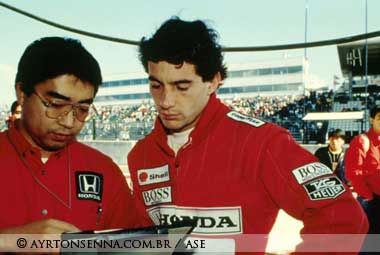 Ayrton Senna was at first reluctant to give me a private interview because he assumed I was a British journalist, several of whom he believed had written unfairly about him.

Too often, he felt, he was portrayed as a villain and he now regarded English-speaking journalists with suspicion. When he learned I was a Canadian who had written a well-received biography of Gilles Villeneuve, one of his boyhood heroes, he decided to talk to me.

At first he was wary and hesitant with his answers but soon an element of trust developed and, as if he had a pent-up need to bare his soul, he eagerly provided me with what became an historic interview.

It took place on the final day of a three-day test session at Monza in September, 1990. On the first day I asked Ayrton if we could talk, just have a conversation that I would tape and use the material as the basis for a profile of him that would appear in my next book, Grand Prix People, Revelations From Inside The Formula 1 Circus. I explained that I had already spoken to over 100 people for the book and it was important that he should be represented. He said maybe he could help and suggested we wait and see if an opportunity came up.

For two days I hung around in the background waiting for an audience, hoping my continuing presence would help him understand how serious I was about this project. On the third day, when heavy rain interrupted the test session, Ayrton was sitting in a hire car behind the McLaren pit with his team mate and friend Gerhard Berger. I saw them watching me and having a discussion during which I assumed Gerhard, who knew who I was, vouched for my authenticity. Ayrton beckoned me over to the car and suggested we meet under the canvas awning beside the McLaren motorhome in the paddock.

We sat at a table under the awning, just the two of us, in those days before PR people felt it necessary to protect drivers from probing journalists. His charming press attaché Betise Assumpcao wasn’t at the test. In any case it was always Ayrton who had the final say about who he would talk to and when.

At first I led the conversation with a few short questions, which increasingly became unnecessary as Ayrton waxed poetic on topics near and dear to him. He was 30-years-old now but still had strong memories of how as a 13-year-old boy he trembled with excitement when F1 telecasts were about to come on the TV in the Senna living room in Sao Paulo – usually early Sunday morning because of the time difference – how his hands perspired, his heart raced as he watched his heroes in action. When he began racing karts he was so inspired by the likes of Villeneuve, Fittipaldi, Lauda, that in his imagination he became one of them, until he began to develop his own identity behind the wheel. He said he still had some of those boyhood feelings of anticipation before the start of a race but they were quickly replaced by the physical and mental demands of driving a F1 car.

He went on to reveal how he felt compelled to put every ounce of his being into his driving – into life itself – which was very tiring. However there were occasions while driving that he became possessed by a kind of superior power that transported him to a higher level. He said there was one particular example that he must tell me about it. Thus he began describing in detail his out-of-body experience during qualifying at Monaco in 1988. It was as if he had never talked about it before and re-living the experience made him particularly animated. He leaned back in his chair, adopted a driving pose, grasped an imaginary steering wheel and closed his eyes as he sought to convey the trance-like state that had empowered him to go quicker and quicker and quicker. When he finished this haunting description he shuddered slightly and sighed audibly as if recalling the memory so vividly had left him exhausted. Listening to him had given me goosebumps and I worried that maybe he had pushed himself too far, revealed too much.

But then his voice softened, his eyes took on a faraway look and he began to speak eloquently, about his life in general – his love of children, how to have a woman by his side made a man’s life complete, how he hoped one day to have a family of his own. He talked about how his deep religious conviction made him a better person. He became agitated when recalling how he was ridiculed when his love of God became public knowledge and some rivals (especially Prost, whose name he never used) considered him a dangerous madman because he thought the Lord was his co-pilot. Ayrton insisted this was absurd because he was very aware of the dangers and used this awareness as a means of self-preservation.

He said the worst thing about his profession was having to put up with people he disliked. One of the most prominent on his hate list was FISA president Jean-Marie Balestre whom Ayrton felt was ridiculously biased against him and favoured Prost. Ayrton’s warm brown eyes took on a steely glint as he recalled how his public and profane criticism of Balestre and FISA in 1989 had led to a demand for an apology or he would lose his licence to race. He revealed that he had “come one phone call away from quitting the sport.” He only came back for the sake of the McLaren employees – not the team’s rich bosses- who depended on him for their living.

What struck me most during our interview was how much of himself he put into it, how hard he tried to not just answer a question but to expand on it, use it as a springboard to ruminate thoughtfully on many topics. Above all was his remarkable ability to articulate his thoughts and feelings in English, a language far removed from his native Portugese. There was no doubting the depth of his conviction and passion and there were several moments of heartfelt emotion. Sometimes his voice quavered, his hands trembled, his eyes misted over. And as our interview neared the finish line he finally became tearful.

As word spread in the paddock that the great Ayrton Senna was sitting under the awning at the McLaren motorhome a crowd of onlookers gathered outside in the rain. Ayrton watched them carefully for a time and finally beckoned one of the fans to come forward to our table. The man shyly presented the superstar with several gifts, among them a piece of ceramic sculpture with Senna’s name on it and also a cake which his wife had baked for him. Speaking in Portugese the fan respectfully explained that the Brasilian was his family’s hero. Ayrton thanked him profusely, put his arm around him and hugged him.

Ayrton was deeply moved and brushed away a tear as our interview resumed. He spoke more slowly now, pausing frequently, thinking aloud as he sought to put this meeting with a fan into perspective. He said this was probably one of the greatest days of this man’s life. He marvelled how he had never seen him before and yet the man had come all the way to Monza to deliver a piece of art…and a cake baked by his wife…something they had made themselves. For a moment Ayrton was lost for words, then he began to describe his feelings…how these offerings from fans made him feel embarrassed and humble…it reminded him of the responsibility a driver has to his followers and showed how deeply they felt about you even though they had only ever seen you on TV or read about you in interviews. As our interview came to a close (we had spoken for nearly an hour) Ayrton finished with these words…

“In many ways we are a dream for people, not a reality. That counts in your mind. It shows how much you can touch people. And as much as you try to give those people something it is nothing compared to what they live in their own mind, in their dreams for you. And that is something really special…something really, really special for me.”

Following this interview Ayrton went out of his way to accommodate my requests, some of which I knew were invasions of his privacy at critical times. One of my continuing assignments from a prominent magazine was to get his final thoughts just before the start of each race. Invariably, no matter how much pressure he was under, Ayrton would summon me to a corner of the garage where he spoke a few words into my tape recorder just before putting on his helmet, providing memorable sound bites he knew would be treasured by his fans. Thankfully, I no longer had this assignment on that terrible day of 1 May, 1994

A Tribute to Life Network - 12/03/2012
0
Auto Manufacturer presents the story of the epic rivalry between Ayrton Senna and Alain Prost for Formula 1 supremacy, one of the most famous... 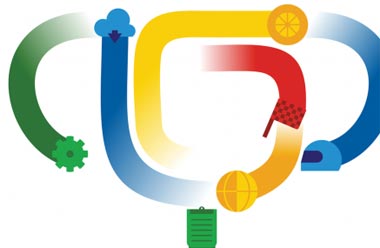 A Tribute to Life Network - 11/03/2015
0
Starting this month, the Ayrton Senna Institute presents to the market repositioning of its brand. The study to provide a more modern brand and accompanying...