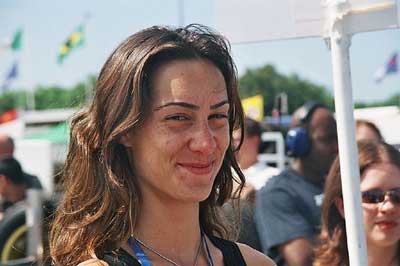 Senna, the Sundance Festival winner and box office hit is being released on DVD and personally I cannot wait.  My favourite film of the year by far and one that I will be watching again and again in my living room for many years to come.

Being a Brazilian and a massive Formula 1 fan it was so much richer than I was expecting.  I was surprised what a wide appeal the film had and pleased at how the film had been made with such a strong storytelling style. The film focuses a lot on the Senna family so when Hey U Guys gave me the opportunity to ask Bianca Senna (Aryton Senna’s Niece) a few questions I knew just what to ask…

Q – How different is the family’s feeling watching Bruno in formula 1 to watching Aryton all those years ago.  Is it a nervous time for the family or are you able to enjoy the races?

Bianca Senna – Watching Bruno race is always a mixed feeling of excitement and anxiousness and I guess that was the same feelings all the family had when Ayrton was racing. You are cheering for him to arrive at the best place on the grid as possible.

Q  – The Senna Film has attracted a whole new audience to Formula 1, did you ever expect the film to be as far reaching and engaging for people that had perhaps never heard of your uncle?

Ayrton’s story and personality is very interesting so I always thought anyone that learned about him would become a “fan”. Even after his death. He is a fantastic example of a person that was always thriving to overcome his own limits, a person who was impressively determined to give his best on anything that he did. He was extremely charismatic as well, so he ticks all the boxes in terms of attracting people to his story/his life. The filmmakers managed to capture Ayrton’s essence through several minutes of well selected footage (a lot of it still unseen) which allowed Ayrton to tell his own history as well show the “darker” side of the F1 at that particular time and how he had to overcome the obstacles on the way.

Q – What would an Oscar nomination for Senna mean to you and your family? Would it be the ultimate tribute to Aryton? Definitely a proof that his story is VERY strong and touching.. A history of someone that is worth being eternal.

Q – What is your driving like Bianca, and when can we expect to see you in formula 1?

My driving is good enough to stay out of trouble on the streets! I’ve never had interest on being a racing driver. I think all that love and passion for speed has been concentrated on Bruno and Ayrton.

Thanks to Bianca for taking the time to talk to us. Post by Alistair MacDonald.