Whether or not Ayrton Senna is the greatest driver Formula One has ever known will depend heavily on your definition of greatness.

If it simply refers to the driver who possesses the greatest natural talent, then it is quite likely that you may be right, but then you can never compare generations. If, however, you judge greatness on the person who enters the sport and changes it forever, then there are few that could deny that Senna, more than anyone else, did just that. 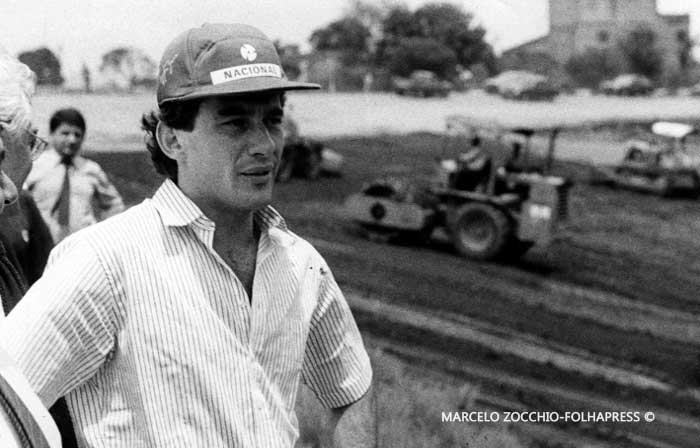 He was born Ayrton Senna da Silva on 21 March, 1960 into a wealthy Brazilian family. Racing would soon become an obsession as Senna began driving at just four years old with a small 1bhp kart built by his father. However, it was not until he was thirteen that he competed in his first race – which he won. In his late teens, the Brazilian competed in the Karting World Championship five times, finishing runner-up twice.

In 1981, Senna moved to England to begin racing in single-seaters. After winning the Formula Ford 1600 Championship, Senna’s parents pressured him to return to Brazil to take his place in the family business. Before leaving England, he was offered a drive in the Formula Ford 2000 series and the young Brazilian made his way back to Britain soon after. As ‘Silva’ was a very common name, he dropped it and began racing exclusively under his mother’s maiden name ‘Senna’.

Titles in Formula Ford 2000 and Formula Three followed, as well as a victory at the 1983 Macau Grand Prix.

Formula One teams began looking at offering Senna a position as a driver. Mclaren, Williams and Toleman all offered him tests in their car. The first was at Donington Park in 1993 with Williams. Senna had won every race he had ever competed in at that track and was surprisingly calm in the car. He was much faster than the team were expecting but a deal for drive in the following season could not be reached. None of the big three teams were willing to take the risk of hiring a young driver but Toleman was on the brink of having to pull out of the sport. As a last minute tyre deal was signed, Senna was announced as one the drivers for the 1984 season.

It was in Monaco of that year that the larger teams started to realise his talent. Toleman was not a winning car, even Senna had said that the car was not capable of winning a Grand Prix. In torrential rain, he began to carve his way through the field, catching the great Alain Prost by almost three seconds a lap. Prost asked for the race to be red flagged and it was brought to an end after 31 laps. Senna could have won but and by his wild celebrations behind the wheel, you would be forgiven for thinking he had.

In 1985 he bought out of his Toleman contract and joined Lotus. In three seasons, the Lotus team provided him with six victories but his greatest successes were to come with a team he had tested with four years earlier.

Senna joined McLaren in 1988 and his timing could not have been better. The McLaren-Honda dominated the entire season, winning fifteen of the sixteen races. However, his skill behind the wheel would almost cause him to walk away from the sport. At the Monaco Grand Prix, despite out-qualifying the entire field by nearly two seconds, he kept pushing until he eventually scared himself, claiming that he seemed to enter a trance and was no longer driving consciously. During the race, this same trance-like state occurred again. He began pushing to go faster until he eventually crashed at the entry to the tunnel. Senna was so annoyed with himself he walked back to his apartment without returning to the pits and did not emerge until hours later.

Even so, the 1988 Championship would go to Senna. Alain Prost scored more overall points than his young teammate but the drivers standings system favoured race positions rather than just points and Senna took his first title. Prost was left smarting as he had been beaten at his own game. The Frenchman had been dubbed ‘The Professor’ for his clinical approach to collecting points, but it was the Brazilian’s all-or-nothing approach that won him the title and the love of the fans.

The two became great rivals and for three years the Championship would be decided by the fate of both drivers and their performances at the Suzuka circuit in Japan. Senna’s victory over Prost in 1988 had left Prost determined to not allow a repeat result a year later.

At the 1989 Japanese Grand Prix, Prost would be champion unless Senna was able to win. Both drivers had very different set-ups on their cars. Prost preferred much less downforce, giving his car greater straight-line speed but he had to brake earlier and was slower through the corners. At the slow chicane, Senna dived down the inside of his teammate. Prost positioned his car to defend but the two cars clashed, their wheels interlocked and the engines stalled. Thinking that the Championship was over, Prost unbuckled himself and climbed out of the cockpit but Senna ushered the marshals to push-start his car.

The Brazilian drove through the escape road and limped back to the pits. With a new front wing fitted, he charged to victory but the podium processions were delayed. Prost had run to the race officials to protest the result. Senna was deemed to have broken FIA regulations by not respecting the race distance and was disqualified. His McLaren team appealed but the FIA President Jean-Marie Balestre sided with his fellow Frenchman. Senna felt that he had been treated unfairly and considered leaving the sport.

He returned in 1990 a changed man. Prost was now at Ferrari but, again Suzuka would become the battle ground for the Championship. Senna qualified on pole with Prost second but the grid had been switched to have pole position on the dirtier side of the track. As a result, Prost got a better start and led as they went into the first corner, however, Senna refused to allow ‘the system’ cost him another Championship and placed his car in a position that Prost could either yield the corner or the two would have an accident. Both ended up in the gravel and the 1990 Championship went to the McLaren driver.

The 1991 Ferrari was uncompetitive and Prost was even fired for criticising the team’s lack of pace. Senna dominated to take his third title. After four years with McLaren, he began looking for a new challenge. Emmerson Fittipaldi invited him to test a Penske IndyCar but he was not tempted to begin racing in America. The Williams car was to become dominant and Senna was eager to become part of the team. Nigel Mansell won the 1992 Championship and by that point Senna was desperate to drive for them. He offered to drive for free but the team had already signed Prost for the following season, who had only one request – to not be partnered with Senna.

The Williams car remained dominant and Prost won his fourth Championship before retiring. This left an open seat for Senna but the team’s dominance was about to come to an end. The electronic advancements that made the Williams car so strong had been banned and the new chassis was unstable in its balance. After a tough start to the 1994 season, Senna was determined to win the Imola Grand Prix. He had struggled with car set-up at the first few races and felt he had lost some of his edge after Prost had retired. The two had shook hands in a public reconciliation at the season-ending Australian Grand Prix and Senna realised that much of his will to win came from his desire to beat his French rival.

In qualifying at Imola, despite securing pole position, the death of Roland Ratzenberger and the serious accident involving his young protégé Rubens Barrichello left Senna wanting to not race.

A large accident at the start of the race brought the safety car out and Senna was seen waving to the driver to speed up as he was unable to keep heat in the tyres at low speed. After the race restarted, the Williams car veered off the track at the Tamburello corner. The reason for the accident is unknown; many believe that the steering column sheered or that the temperature of the tyres was too low and caused the car to skate across the track. The tyre pressures would also be low which would increase the likelihood of the car bottoming-out as the air rushing over the wings and through the diffuser, at full speed, forced the chassis lower to the ground.

On impact, a piece of suspension hit Senna’s helmet, causing massive head trauma. He was taken to hospital but died soon after. In Brazil, people will remember Senna, not only for his driving, but for the millions he donated to under privileged children and his love for his country. Brazil was facing tough times with crippling poverty in many areas. In a time when many hid their heritage, Senna would wave the Brazilian flag proudly.

Much like your definition of greatness, the question of Senna’s genius will also depend on your definition of just what ‘genius’ is. Martin Brundle said. “I define genius as just the right side of imbalance. He is so highly developed to the point that he’s almost over the edge. It’s a close call.”