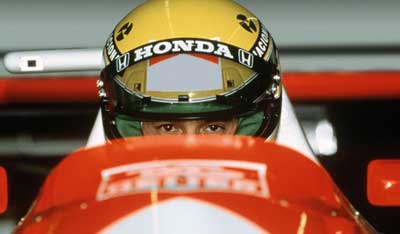 THERE’s a whole range of ways to negotiate the complex relations of film and history. Costume dramas, picturing the past, threaten to be genteel, all too tasteful; but then you find one as dynamic as Creation, a version of Charles Darwin’s emotional life as he toiled on The Origin of Species.

Then there are those uncomfortable mixtures of archival material with re-enactment, beloved of SBS as they fight the Nazis time and time again. In the films of John Hughes of Melbourne, there is an elegant and eloquent balance of contemporary viewpoint with recorded memories and the material traces of the past, in his work on the submerged histories of the left in Australia: in Filmwork, The Archive Project and After Mabo among others.

Part of Hughes’s gift is in showing how any work on the past is also work on the present. This is also true of the powerful documentary called Senna, which resonates the more strongly by working not with memory (talking heads) but with material traces of a short life, the Brazilian Ayrton Senna’s (1960–94).

Senna, directed by Asif Kapadia, is made entirely of old news footage and clips from the archive of the Formula One motor racing organisation, home movies, TV news footage and family photographs; in historians’ terms, primary documents. The whole essay is a major triumph of editing, by Chris King and Gregers Sall and their team; this 106-minute film was sculpted out of 15,000 hours. The visual rhythms counterpointed by Antonio Pinto’s music, with lots of bossa nova and Samuel Ferrari’s electric guitar; voiceover comment from Senna’s family and his doctor, Sid Watkins, who offers a particularly humane perspective. We follow Ayrton Senna from his teens into his thirties, beginning with go-karts – that, he says, was “real driving, pure racing, it makes me happy.” By that he means that go-karts didn’t involve money, or the infighting of the F1 organisation; we catch sight of that when Senna walks out of a back-room argument with the bullying president Jean-Marie Balestre.

On to one Grand Prix after another, the images are grainy, often jumpy and blurred; no zooming-in, no polishing by afterthought. No nostalgia, and no kind of deficit; the film builds its own aesthetic, offering a sense of seeing at close quarters, sharing the trajectory, picking up fragments of a story, with no claim to make them more than that: this is precisely not about Senna’s private life, and with tangential references to girlfriends – one, who was evidently the last, is glimpsed and named – there’s no mention at all of his very brief marriage. We hear the voices of his mother and sister, but they’re barely seen. Some commentators have registered frustration with this, but they misunderstand the film’s project. With all the young man’s glamour – and if this were fiction you wouldn’t cast him; he’s a deal too pretty – this romance is not about persons but about winning, winning the biggest possible prizes, and what the monster show-business of his races meant to a huge country in which most people are poor. Early on there are images of the favelas, the slums of Rio, where Senna pitched in and did community work in his weekends. Near the end, there are high, wide images of his funeral; the event is communal and national.

The one personal relationship that matters is the complex one with Alain Prost, the durable French champion, five years older than Senna. They began as team-mates and friends; then the rivalry set in as they alternated first and second places, and the exchanges grew venomous, to neither’s credit. Twice they collided on the track; Senna was accused of dirty tactics, and he acknowledged them. Prost emerges as the more complex, more thoughtful character; he is pragmatic and wily, where Senna is poetic and devoutly religious, always believing that God is with him on the tracks. Talking to camera, Prost says that the problem for Senna is that “he doesn’t believe he can kill himself; I think that’s very dangerous.” The survivor was a pallbearer at the funeral, and he has said that despite or because of their personal war, a part of him died with Senna.

The camera is in the capsule-cabin as Senna zooms round the circuits in Monaco, Melbourne, Japan; you share incredible speeds (250 kph), get dizzy on the bends, and come close to the phenomenal young champion as he drives the last lap of his life in San Marino, Italy. That comes only a day after the death of his competitor Roland Ratzenberger; the glimpses of Senna in the short interval show a sobered hero who actually stops to wonder why he’s doing it, asking himself what the whole game can possibly be about. Along the way he has told an interviewer that he knows there’s more to life than racing; but, he says, he will learn and discover more, he has a lot of time ahead. The audience knows otherwise, but the tension and drama are unabated. That end was not inevitable; the irony is that only hours before it came Senna was working to make the sport a safer one. We are told that there have been no deaths in F1 racing since, that safety has been increased partly because of measures he worked for, and partly because of lessons from his death.

The film has been accused of lionising Senna, producing him as angelic; in words attributed to the conservative columnist Tim Blair, its account is “unbalanced to the point of dishonesty.” Not true, if you attend properly; we do see the elements of arrogance, the spectacle of a prince enclosed in his role, in his own aura, surrounded by kin and allies who serve it; he has known nothing else. The film lets us see all that from the outside. It opens space for later contemplation of superstars and their stories, and how it’s been that Senna’s has travelled so far beyond Brazil.

IF WE really must have our literary classics illustrated, the new version of Jane Eyre is made watchable by three excellent performances. Mia Wasikowska is a grave and very intelligent Jane, one always holding resistant strength in reserve. Michael Fassbender’s handsome Rochester matches her, so that the mutual challenge is constantly felt, and he has a fair touch of the Heathcliffs – I wondered how far those Bronte girls’ fantasies were as much collective as individual; no doubt literary scholars will have busied themselves on that question. The dreadful Mrs Reed is a thankless part for Sally Hawkins; the Lowood and St John Rivers episodes are despatched rather briskly. Judi Dench is a satisfactorily earthy Mrs Fairfax; the moors are very wide and bleak, the rain comes down on cue, and guess what: love conquers all.

No time here for bloody-minded feminist considerations on the plight of the madwoman in the attic, or recollections of Jean Rhys and Wide Sargasso Sea; this could have been made fifty years ago. I can’t say whether it’s the best of its long line, since I did not see the Zeffirelli version with William Hurt and Charlotte Gainsbourg; but if it sends people to bookshop or library to connect or reconnect with the truly magnificent novel, some good may have been done.

Similar considerations apply to Sylvain Chomet’s The Illusionist, a hommage to the late and great Jacques Tati. As an animated feature, beautifully and richly drawn and painted, it is not nearly as engaging as the same director’s rich and witty The Triplets of Belleville (2003), which had a well-packed plot around three long-retired jazz singers. There’s a thematic link; again there’s ageing performer, a memory of crowded halls and sizeable audiences; but this time the story around the ageing Monsieur Hulot is too thin and wandering. The images of near-empty auditoria are only too reflexive of the film itself; when I saw it, I counted seven others in the Chauvel. Again, there’s more profit in finding M Hulot’s Holiday or Playtime, if you can find your way to some exceptionally well-stocked DVD and video source.

Failing that, I recommend the excellent American critic Jonathan Rosenbaum’s writings on Tati in his recent book, Goodbye Cinema, Hello Cinephilia: Film Culture in Transition (University of Chicago Press, 2010). On his subtitle, he comments that film culture “has pretty much remained in transition for all of its existence, and will continue to remain so. That is an integral part of its mystery and magic and its continuing emotional hold on us.”