On Thursday 20th october marks the 25th anniversary of the world’s third championship of Formula 1 won by Ayrton Senna. To commemorate this date, the BB Publisher and the Instituto Ayrton Senna launched the “Ayrton Senna Parade”, the first open air museum in the world on the Senna’s career in Formula 1.

The 11 new sculptures, signed by the artist Rafael Sanches made from steel, will be from October 20th to November 15 in 11 different points of São Paulo and nearby towns. Then the collection will be exhibited at the Interlagos Circuit, where it will remain indefinitely. 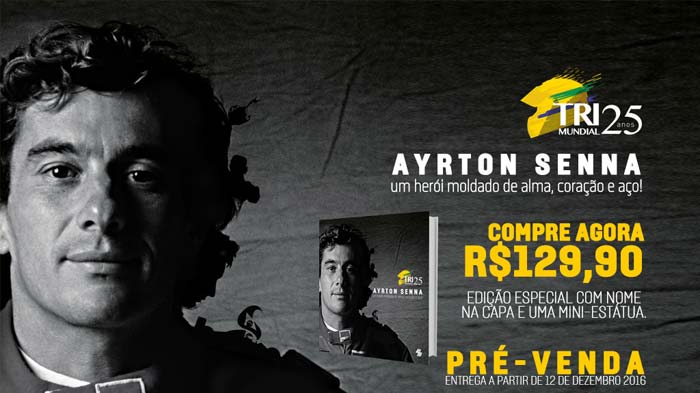 “Without a doubt, this project is one of the most special and differentiated made in honor of Ayrton Senna. The Museum will have statues of our eternal pilot, “says Baroni Neto, CEO of BB Publisher.

For Bianca Senna, Branding director of Instituto Ayrton Senna and niece of the triple world champion of Formula 1, the tribute will be a way to continue spreading the legacy of the late triple champion in the city where the pilot was born and raised.

“Ayrton has a great connection with all Brazilians and also to the city of São Paulo. The fans have always asked for a space so they could remember it and that’s a tribute that we are dedicated to everyone who has a great affection for Ayrton, “says Bianca.

In addition to the exhibited statues, the project will also have the edition of a book: Ayrton Senna, a molded hero soul. The work brings together in its scope the draft, even on paper, the creation and development of the statues, and texts depicting each of the themes of each sculpture.

The book also features mini statues equal to those to be exposed, to be delivered along with the marketing of the work. “In the 11 years of Formula 1, we try to be faithful to each time of Ayrton Senna. We got the best of Ayrton Senna, “summarizes Rafael Sanches, artist responsible for the statues.

The partnership BB Company and Instituto Ayrton Senna began in 2014 with the edition of the book “Senna – The history of Tetra – third championship.” The work revisited Japan’s evidence in 1989, when a FIA’s controversial decision took the Senna a chance of “fourth world title”.