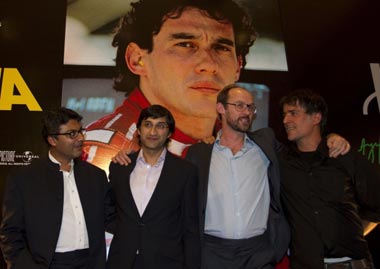 Picture this, arguably the greatest racing driver ever sitting on the grid, bearing down on the world championship. The lights go out and he stalls. The field fly past him and by the time he gets away, he’s in 14th place. However, our determined hero bursts through the field overtaking everyone as he hunts the driver in first place, his nemesis.

Suddenly the heavens open and it starts to rain. In difficult conditions he gets faster, overtaking his rival and winning the championship. Sounds far fetched? Well this is just one of the true stories from Senna, the documentary about Ayrton Senna, one of the most enigmatic sportsmen ever.

To many, Ayrton Senna was a hero, a legend in the making. To Asif Kapadia, a BAFTA-winning director and the man to bring Senna to the silver screen, he is a film makers’ dream. However, even for Kapadia, a self-confessed sport enthusiast, he couldn’t forsee just how mammoth a task a film on Senna could be.

“I know how big Senna is around the world. Or at least I thought I knew. One thing I didn’t realise was the amount of love there is for him. I knew he was famous. I knew he was loved in Brazil. I knew he was big in Japan, but this film has been such an experience and quite humbling because of the response we’ve had from the fans.

“I had calls from all over the world, emails and people contacting me on Facebook saying ‘I hear you’re making a film about Senna, I love this guy, is there anything I can do to help?’ And that is really unique, you don’t get that with most people and you certainly don’t get that in the world of movies.”

Along with producer James Gay-Rees, acclaimed for his work on the Banksy documentary ‘Exit Through The Gift Shop’, and Manish Pandey, a screen-writer and Formula One obsessive, Kapadia had the structure in place to make the documentary come alive.

“The holy trinity of the writer, director and producer is to have people who aren’t the same, but to have people who look at things from a slightly different angle. Between you, you’re going to end up with something much stronger.

“Before I made the film I had never read a book about Senna, I’d never sat there on the internet studying lap sector times. But Manish was that guy on our team. That’s what was so brilliant. We had someone who had done that, who had spent his time watching every single race, read every single book, who knew everything and everyone. He’s a mega brain, a Cambridge graduate, and he’s got an amazing memory for detail.”

In James Gay-Rees, Kapadia had an idea. His father had worked alongside Senna for John Player Special, when the Brazilian drove for Lotus, and it was after reading a series of articles published around the tenth anniversary of Senna’s death that he decided to meet with Kapadia and pitch the idea.

While Gay-Rees flirts with the theme of spirituality throughout the film, for Kapadia, the main issue was creating an entity so pure that it could appeal to the Formula One fanatics, as much as the everyday person on the street.

“Just imagine if you make the Senna film and you screw it up. There were so many doubts that were in my head when I first had a meeting with James and Manish. There were two things; One, I don’t want to mess this up, and Two, how do we make it work for non-fans?

“If we make it purely for he fans then the worry is that it could go straight to DVD. We wanted it to be a cinematic experience that people go and see on the big screen. Then it had be something that people wanted to own, so it was important to show material that everybody hasn’t seen before on YouTube.”

However, it was only with the co-operation of the Senna family, who fully embraced the project, and Formula One supremo Bernie Ecclestone offering the use of his personal archive of footage, that the project could bear fruit. Kapadia wanted to create a film which could be uttered in the same breath as Hoop Dreams, When We Were Kings and even Raging Bull, a film he confesses is one of his all time favourites.

While it would be easy to document Senna’s life and legacy through the voice of others, he wanted Senna to tell the story and so relied on Ecclestone’s archives.

“These are the films that I love, as a fan of sport, but also as a fan of cinema. [Muhammad] Ali was probably my hero growing up, he was the one who I looked at and read books about. For me you don’t make an actor play Ali, Ali has to say his own lines. With Senna, the more we realised we potentially had someone with the same level of charisma, we realised that no-one should be talking for him, he tells his own story.”

Kapadia admits that it was only scouring through the hundreds of hours of archive footage that they realised they were really onto something. “The interesting thing was that Senna’s life, as we started to put it together, it naturally fell into place. It played like a movie. It feels like you’re watching a movie which someone has written. If you had written it down no-one would have believed you.

“Even if you wrote [Jean-Marie] Balestre [Head of the FIA] as a movie character people would say you’re being a bit hard on the French guy aren’t you? This is all real. Our point was to show that the reality was sometimes tougher than anything we could have ever made up.”

While the likes of Manish and James searched for themes of spirituality and totality within the film, the directorial mind of Kapadia searches for that one defining shot. As Kapadia admits, it is the idea of isolation and abandonment which resonates most with him. At the moment when the fatality of Ratzenberger sets in, Senna’s mood dramatically changes and for Kapadia, this is the strongest part of the film.

“I think he looks so afraid and lonely, and for the first time in his life he has doubts. All he has ever wanted was to drive and go as fast as possible. Suddenly it’s hit him that this isn’t the answer anymore. I think it’s hit him that he’s absolutely alone in the world at that moment.

Whatever Senna was thinking at the time, we’ll never know, but for Kapadia, the process of getting into the psyche of one of the most fascinating sportsmen ever, has been reward enough.

“I can’t explain how much I’ve enjoyed this. All that misspent youth sitting on the sofa during the summer just watching a cricket match from beginning to end, or watching every bit of a race, and to have the chance to make a movie about something I love has been incredible. I was into sport long before I was into cinema. To have a chance to make something like this about a character like Senna makes me feel so lucky. 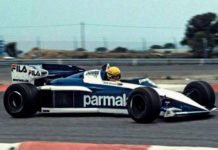 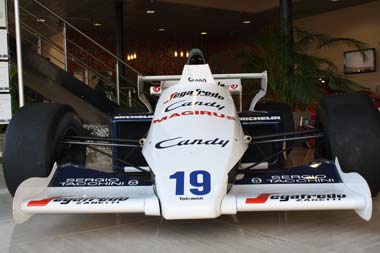 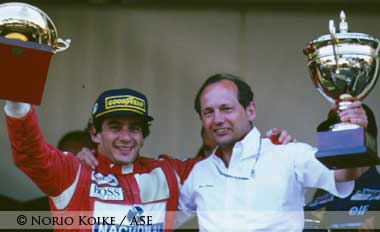 Ron Dennis: I miss those times with Ayrton

A Tribute to Life Network - 24/10/2014
0
It is not the success, the domination or the three drivers’ world championships and 35 races the Brazilian won over the six seasons they...