The 1989 Formula One season was the first season where the cars returned to the now traditional normally aspirated engines. Forced to abandon the incredible 1.5 litre Honda RA168E twin-turbocharged engine – which made an astounding 900BHP – the Woking team needed a new car to accomodate the new 3.5 litre Honda RA109E V10 unit but still match the incredible results of 1988’s MP4/4 where Prost and Senna managed ten 1-2 finishes and Senna was crowned 1988 F1 World Champion. 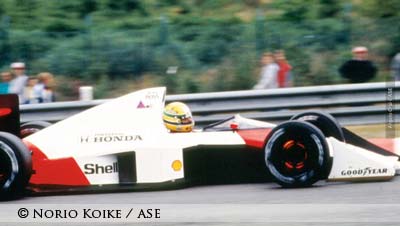 McLaren developed the MP4/5 for the 1989 season and I don’t think anyone could have predicted the success the 4/5 would have in its inaugural season. However, the success of the MP4/5 – ten wins from sixteen and fifteen pole positions – was somewhat overshadowed by the on and off track disputes between Prost and Senna.

In 1990, Prost – now the reigning world champion – would move to Ferrari along with McLaren designer Steve Nicholls whilst Gordon Murray would begin to focus on the McLaren F1 road car project. With such big changes in the staff, McLaren decided to use the MP4/5 once again but in a sort of evolution form where the team would try and improve upon the 1989 Drivers and Constructors World Championship winning car.

Honda provided a slightly revised V10 engine pushing power from 685BHP to 690BHP with the overall weight remaining at 500KG / 1102LB which resulted in approximately 1,380BHP per tonne of weight. Aerodynamically the car used larger side pods and revamped radiator ducting to assist cooling of the RA100E power plant.

Although the car suited Senna quite well, McLaren’s new signing Gerhard Berger was too tall for the car – a problem which was resolved by sitting Berger more upright in the car. A new windscreen was also installed on the car to account for this change. Another notable improvement was a revision of the transverse six speed gearbox and a larger fuel cell.

Of course as the season progressed, more changes were made to the cars including a new underbody and new aerodynamic pieces. What did all these improvements account for? Twelve pole positions between Senna and Berger, six wins for Senna, another world championship for Senna and a third successive constructor’s title for McLaren.

McLaren and Senna continued their successful partnership into the 1991 season with another pair of world championship titles behind the wheel of the Honda V12 powered MP4/6 but complaints from Senna that the Honda engine was lacking were justified during the 1992 season as McLaren could do nothing except watch Williams with Nigel Mansell walk to the ’92 titles.

Senna’s last win would be behind the wheel of a McLaren at the final round of the 1993 World Championship in Australia before he moved to Williams for the 1994 season. The pairing of McLaren and Ayrton Senna is arguably one of the greatest of all time, perhaps only bettered by that of Ferrari and Schumacher but I don’t believe that a fair comparison can ever be made between the two because of Senna’s death at San Marino in 1994.

We will just never know what Senna had left to show us.